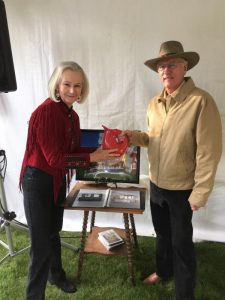 Breckenridge, CO September 16, 2016 – The Breckenridge Heritage Alliance, a leading organization for preservation of the history of the America’s western frontier, has awarded American Public Television host Christy Rost and her husband Randy the 2016 Theobald Award for historic preservation and advocacy.

Each winner of the Theobald Award (1) Exemplifies the town’s commitment to historic preservation; (2) celebrates the history of Breckenridge in a unique way; (3) demonstrates leadership and/or volunteerism for historic preservation and heritage tourism; and/or (4) discovers new facts or stories about Breckenridge’s history, to be shared with the public.

Christy and Randy Rost received the 2016 award for their outstanding remodel and preservation of Swan’s Nest, a house built in 1898 by gold baron Ben Stanley Revett for his bride. Randy and Christy purchased the property on Auguest 8, 2006, and spent years restoring the home while bringing its infrastructure up to 21st century standards. Public Television chef and host Christy Rost is the author of three cookbooks, a television and radio personality, entertaining guru, lifestyle authority, and is passionately dedicated to the celebration of Home and Family.

Since 2009, Rost has welcomed viewers on PBS and Create TV each November for an up-close, inspiring Thanksgiving celebration that centers around the Rost’s extensive restoration of their historic 1898 mountain home. While caught up in a roller coaster of challenges and hard-won achievements of Christy and her husband Randy’s top-caliber home restoration, viewers from coast to coast connect with Rost’s warm and passionate approach to cooking, decorating, and family celebrations at Swan’s Nest, set overlooking the stunning Rocky Mountain Tenmile Range. Rost’s programming is the sole national public television cooking and lifestyle content based in Colorado. Since its premiere seven years ago, A Home for Christy Rost: Thanksgiving, a production for American Public Television, has reached more than 91 percent of the country with 6,600 broadcasts on 340-plus stations in 46 states. The beloved annual special will air again in November 2016.

The Rosts received the honor on Thursday, August 18 at the fifth annual Theobald Award reception that was hosted at the Barney Ford Museum in Breckenridge.

“Randy and I are honored to have received the 2016 Theobald Award,” said Christy. “Discovering and restoring Swan’s Nest, regarded by some as one of Colorado’s most historic homes, was a special privilege. We were already in love with Summit County, having vacationed in the area for many years.”

“Becoming part of the history of this house as we repaired its foundation, upgraded its infrastructure, reclaimed its handcrafted architecture, and instilled a sense of elegance befitting the gold baron who built it in 1898, It was exciting, exhilarating, often-times challenging, and always an exercise in creativity. At the same time, I became ever-more aware of how astoundingly beautiful nature is, how connected we are to the land, and what a gift it is to spend a portion of our time in the American West.”

The annual Theobald Award was established by Robin and Patty Theobald. The Theobald family traces its history back six generations, to the days when Breckenridge was no more than a fledgling mining town. While generations of Theobald family members made a mark on Breckenridge’s history, Robin Theobald, born in Breckenridge in 1951, and his wife Patty, have been instrumental in maintaining the community that Robin’s ancestors helped create. Together the two have preserved 15 historic buildings in Breckenridge. In 1972, years before the Breckenridge Historic District and local design guidelines existed, the Theobald’s completed their first historic preservation project. Their more recent projects include the Tin Shop, now used as a guest artist studio, the Barney Ford Victorian Home, now operating as a house museum dedicated to Breckenridge’s first black businessman, and the 1880 general store at the corner of Ski Hill Road and Main Street. Robin currently serves on the Board of the Breckenridge Heritage Alliance.

The Breckenridge Heritage Alliance is a non-profit organization founded in December 2006 to promote and protect Breckenridge’s unique heritage. Through a collection of historic sites, guided tours and hikes, as well as programs and events for all ages, the Alliance encourages residents and guests to experience what life was like in Historic Breckenridge. www.breckheritage.com

2016 Theobald Awards:
Christy and Randy Rost received the Breckenridge Heritage Alliance’s 2016 Theobald Award for historic preservation and history advocacy in recognition of their renovation of Swan’s Nest, their Victorian-era home in Breckenridge, CO. The Rosts were presented the award in August by Robin and Patty Theobald at the fifth annual reception for the honor.

About Christy Rost
In her programming on PBS and cooking and lifestyle books, especially in her most recent book, Celebrating Home (Bright Sky Press), Christy Rost inspires readers to view their homes in new and fresh ways and appreciate the beauty surrounding them, while providing the knowledge and tools necessary to create memorable meals, and master the art of entertaining and home decorating with confidence and style.

In her YouTube video series Christy Rost Cooks: Celebrating Life & Home, Christy continues that journey with a modern, fun approach to easy, delicious recipes, creative and festive tablescapes that begin with what’s stashed in the cupboards, inspiration and how-to’s for casual gatherings and effortless entertaining, gardening tips, and DIY home decor – all in a realistic, budget-friendly, can-do fashion. Christy’s entertaining and home decor advice is featured on www.oprah.com.

CVS Health to provide bonuses, add benefits and hire 50,000 in response to pandemic